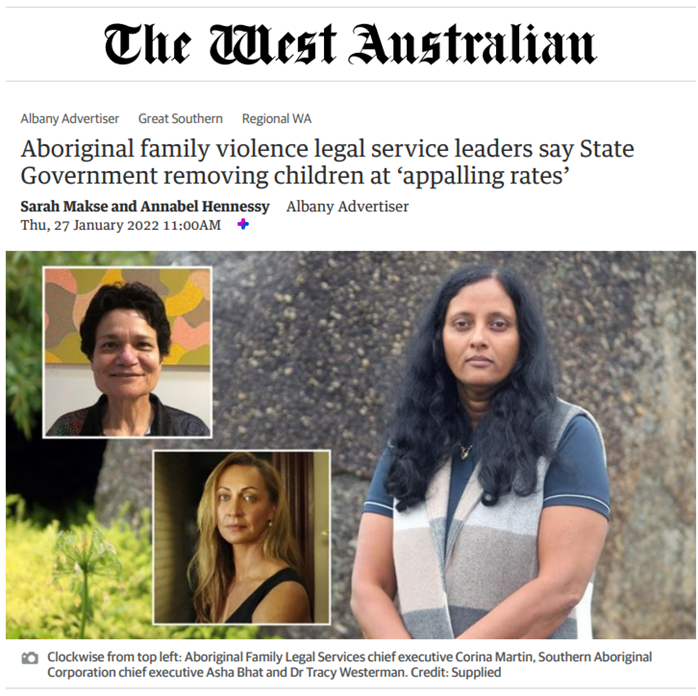 The heads of two major Aboriginal family violence legal services have accused the State Government of systemic discrimination against Aboriginal organisations and removing children from their families “at appalling rates under the guise of protecting them”.

An investigation by The West Australian last week revealed leaked internal reports from the Department of Communities found the organisation was plagued by “wide-scale and endemic racism” and was at a “crisis point in relation to providing services, programs and initiatives to improve outcomes for Aboriginal people.

A 2019 report to the department, by highly respected psychologist and former West Australian of the Year Dr Tracy Westerman, warned racism and cultural incompetence within the department was causing worker burnout and Indigenous staff to feel “less valued”.

In the report, a survey of 295 child protection staff found not one of them believed the organisation ensured a “culturally safe work environment”.

Just one of the staff members assessed under the Cultural Competency Profile — a tool developed by Dr Westerman to evaluate those working in child protection — was found to meet the cultural competence benchmark.

Another leaked report from consultancy firm PricewaterhouseCoopers in 2021 raised concerns that the 49 recommendations made by Dr Westerman had not been acted on by the department.

Ms Bhat, who is based in Albany, said the department was failing to improve outcomes for Aboriginal families with its “inadequate cultural training and paternalistic ‘we know better’ approach”. “The PWC report has described the department as being at a crisis point in relation to providing services, programs and initiatives to improve outcomes for Aboriginal people in WA, and this is something we are seeing and experiencing the impacts of everyday,” she said.

“Aboriginal children and families are being left behind by a system that is supposed to be supporting and strengthening them.

“How can this be an experience that is just accepted?”

“They don’t understand kinship and don’t consult and removal often occurs in the absence of these two things,” Dr Westerman’s notes from one focus group stated.

Ms Martin and Ms Bhat said the child removal issue was the most concerning aspect of the leaked reports.

“The department removes Aboriginal children from their families and their communities at appalling rates under the guise of protecting them, yet these findings show that inadequate effort is going into trying to keep children safe in their homes to start with,” Ms Martin said.

Ms Bhat said the same experiences were commonplace in the Great Southern and South West.

In a joint statement, they accused the State Government of “systemic discrimination” against Aboriginal community-controlled organisations.

“The three Aboriginal community-controlled family violence prevention legal services in WA are in a particularly strong and unique position to drive systemic change and make a significant impact for Aboriginal people, yet we have been consistently underfunded and under-resourced by the State Government,” they said.

“This is disheartening and shows just how committed the State Government is to achieving outcomes under Closing the Gap.

“It also represents an apparent distrust of Aboriginal organisations to manage services for Aboriginal people.”

“Significantly, this is the first end-of-year decrease in the total number of children in care since 1997, and almost all child protection districts recorded a reduction in the number of Aboriginal children in care.”

“Communities remains committed to working more closely with Aboriginal people, organisations and communities to build stronger connection to family, culture and country for Aboriginal children in care,” she said.

The Department also planned to establish an Aboriginal strategic advisory group, she said.